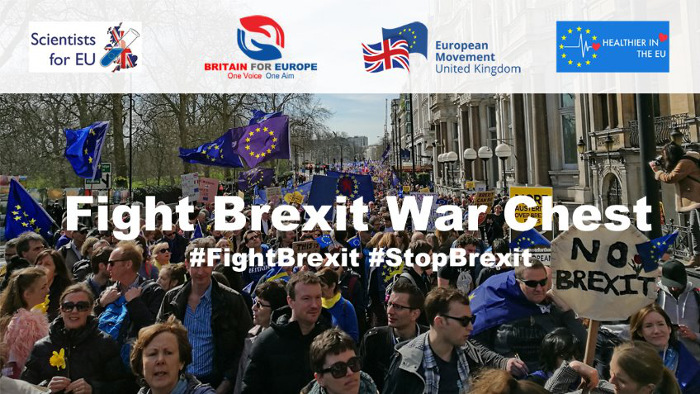 Since the general election, the Brexit government has been in disarray, with Chancellor Philip Hammond and Trade Minister (disgraced ex-Defence Secretary) Liam Fox clashing publicly on multiple occasions. There have been calls for Theresa May to step down as Prime Minister, with many saying she won't last her full term and polls show the Conservative Party is seen as divided and at war with itself.

With this backdrop, the Remain campaigns are coming together, "united in diversity", stronger than ever and focused on what needs to be done.

The four campaigns have launched their partnership with a crowdfunding drive to raise £60,000 to support rallies at the main party conferences and a lobby of parliament - taking direct democracy to Labour and the Conservatives, proving that British democracy is a participative process, not just a one-off event.

Dr Rob Davidson, CEO of Scientists for EU and Healthier IN the EU, said,

"We all know the referendum campaigns were misleading and that's why it's important we keep adding democracy to Brexit instead of letting the same old politicians have their way. The facts are emerging about Brexit Britain: no money for the NHS, more austerity and cuts to public services, brain drain from universities and hospitals and industries across the whole of the UK, stagnant wages and rising inflation. This isn't what people voted for.

The referendum was a democratic choice to start a process, and it proves why British democracy is never just a one-off event. We need more democracy in Brexit, more democracy for the British people, now that the true facts of Brexit are becoming apparent."