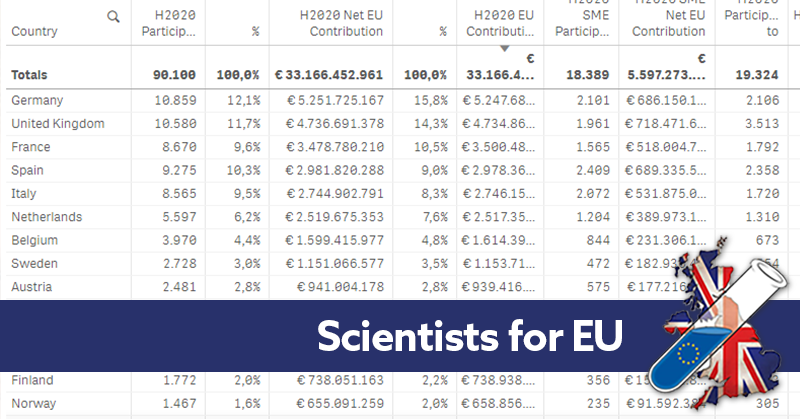 We calculate a no-deal Brexit loses the UK some 45% of its access to high-value Horizon 2020 grants. Given the UK has been drawing €1.283 bn per year from Horizon 2020, by our calculation 45% of that figure translates into a price tag of €577.35 million per annum. The government has also, without explicitly admitting it, effectively ruled out UK institutions from coordinating multinational grants after Brexit day in a no-deal scenario. The UK has, to date, coordinated more Horizon 2020 grants than any other country and so this would be a huge blow to the UK’s leadership on big science.

Below we tackle first the calculations of funding lines lost. Then we explore the issue of coordination. Then we discuss whether this could be salvaged with a side-deal for science. Finally, we cover the chilling effect this will all have right now and how to address it.

In the technical notes, the government acknowledges that in the event of no-deal Brexit, the UK becomes a ‘third country’. They state (and all sources I have spoken to agree) that this means ineligibility for these three funding lines:

The first two lines (ERC and MSCA) are huge for the UK. In fact they are the largest two funding lines in terms of the UK’s grant winnings from the EU (see graph below).

Graph: Horizon 2020 funding to UK to date – by funding line.

So how much funding has the UK received to date – and how much of that has come from ERC, MCSA and SMEi grants? Let us crunch the numbers. (All the data below are drawn from either the EU’s Webgate system that allows analysis of Horizon 2020 grants allocated so far - or the summary page for the SME Instrument grants.)

A simple, robust calculation of the loss from no-deal Brexit would therefore be to calculate the annual takings of UK science under Horizon 2020 and multiply it by 0.45. As we do not readily have available how much the UK has won each year, we will calculate it crudely using the total number of UK grants won each year multiplied by the average money the UK gets per grant (total UK taking/ total UK grants):

So to calculate average annual takings, I will average the years 2015-2017 (ignoring 2014 - the year the programme started as it took months before grants began to be signed – and 2018 as the data are incomplete).

Adding the middle three years and dividing by 3 provides a figure of €1.283bn per annum to the UK.

Note that the total period of loss could be 1.5 years-ish (>£800m) or 2 years-ish (>£1bn) dependent upon whether i) the Commission signs ERC, MCSA &SMEi grants submitted before Brexit Day on the understanding the UK government will pay or ii) declares all UK submitted grants ineligible after Brexit Day. This also presumes a time-to-grant period of 6-8 months between submission and sign-off, with the last Horizon 2020 grant calls in end Oct 2020 and signed in May-June 2021. This is where attempts to calculate total loss get messier.

There is a further issue that limits the UK’s options in the no-deal Brexit circumstance. That is that as a third country, the UK would no longer be able, pragmatically, to coordinate large multinational EU projects.

Although the rules of Horizon 2020 do allow legal entities from third countries to coordinate projects, there’s a catch: The Commission will not reimburse those legal entities in third countries. Their government has to pay for their part. Furthermore, it is the role of the coordinator to receive all the project funds and distribute them to all partners in all countries. If you therefore wish to be a coordinator in a third country, you won’t get the money for you and all your partners from the Commission. Rather, your own country has to pay – for everyone. That is why there are so few third country coordinators (The US for example has had 1,060 project participations in Horizon 2020, but only 1 coordinator role. The UK has had 10,580 participations and 3,513 coordinator roles).

The UK government has clearly spotted this. In the technical notes released, they say:

How indeed. There are two obvious solutions. One would be for the UK government to take over paying for the whole project so that the UK partner can retain leadership. The other would be for the project to switch coordinator to an EU Member or Associated Country and the UK partner step down to a mere participant. Maybe it would be done on a case-by-case basis.

So, going forward, what of the ability of UK institutions to coordinate future projects? The UK Government set out, on 24 July 2018 an underwriting guarantee for all UK grants won by UK entities after a no deal Brexit. However, in the newer technical notes it is now stated:

And *that* is the killer blow for future UK coordination roles on Horizon 2020 under no-deal Brexit.

If a consortium puts in a bid with a UK coordinator, the Commission will not transfer funding to that UK coordinator if we enter a no-deal scenario. Furthermore, the UK government will not guarantee it at the moment either. That means in a no-deal Brexit, UK coordination of EU multinational Horizon 2020 projects is dead in the water.

This is another hammer blow, as the UK has coordinated more Horizon 2020 projects than any other country - 3,515 projects so far. In 2nd place is Spain on 2,358 then Germany is 3rd on 2,106. If you look at EUR value associated with coordinating projects, the UK is still in 1st place (€2.43bn) and Germany in 2nd place (€2.23bn). The UK is lead coordinator all round - and has a longstanding reputation as such. A no-deal Brexit would pluck us from that esteemed position. That hurts talent attraction as many top scientists will want to go to where they can lead 10, 12 or 15-nation projects.

Can this all be salvaged with a super-quick science deal?

Some might note that Norway, Switzerland, Albania, Israel and even Tunisia are Associate Countries to Horizon 2020 – and have full access – so why can’t the UK become an Associated Country in a no-deal scenario? This would certainly be the priority of the UK science community if we entered that territory.

The main problem would be that in the no-deal scenario, a science deal is just one of many deals that would need to be negotiated and signed. And in a chaotic environment, it may well not be a priority. In fact a ‘no-deal’ scenario only means no main deal. There would have to be a flurry of small side deals to patch up gaps such as air flight rights, qualification & safety certification recognitions, medicines access, citizens’ rights to access banking, pensions, cross-border healthcare reimbursement agreements and many more life-and-death basics. Issues more critical than worrying about whether top science talent and coordination goes to the UK or Germany. And they all take time. Science just may well bumble along with the third country status until other things get sorted first.

It’s also worth noting that we’ve already agreed a side deal that covers science until 2020. It’s called the Withdrawal Agreement. By covering budget contribution, ECJ and Free Movement to 2020, we got that access. The no-deal scenario, by its nature, means that we just reject the deal that got us the full Horizon 2020 access. Would those be exactly the same terms the EU would want to secure from us in order to reinstate science access? What would be the new terms? The government’s technical notes do not even mention the possibility of trying for a quick associate member status in this no-deal circumstance.

All of this no-deal Brexit possibility hanging like a phantom over us will have a chilling effect right now.

If a grant takes 6-8 months from submission to sign off, well, we are 7 months away from the scheduled Brexit Day. Is it worth putting in that ERC, Marie Curie, SMEi grant or consortium application with your lab as coordinator? Would you do that now – or any time from now onward? What if your application is judged a winner, but comes up for signing after March 29th 2019 in a no-deal world and you are then rejected as ineligible? What then?

This is where the UK government now needs some creative solutions. As they start registering UK grant recipients of EU funds in their system to back-up payments in case of a no-deal Brexit, that will also drive home the awareness that we may be soon ‘out’. The chilling effect will intensify. It will also make hiring talent harder if potential applicants to the UK think they potentially cannot get at top EU grants based from our institutions. So the government needs to think harder about clever back-ups to keep the EU applications for ERC, MCSA, SMEi and coordinator roles going in. With ERC for example, you are allowed to spend up to 50% of your time in a non-EU/associated country. Would it make sense simply to encourage potential grantees to nominate a UK 51:49 EU balance in their applications, and switch the ratio if a no-deal happens? Can they make back-up grant systems to cover the same roles if the UK grantees suddenly become ineligible? (like the Swiss did in 2014 for ERC grants when they temporarily became a third country on Horizon 2020). I have no solution to the coordinator role problem.

Of course, all of this could be easily dispelled in a stroke if the UK government were simply to announce that, come hell or high water, it will honour the Withdrawal Agreement of December 2017 and talk no more of crashing out with no deal.

[I’d like to thank all the science policy experts on both sides of the Channel who lent their time to address my flurry of questions and provided informal, rapid peer-review. All errors in this are my own. If you spot any, please let me know.]