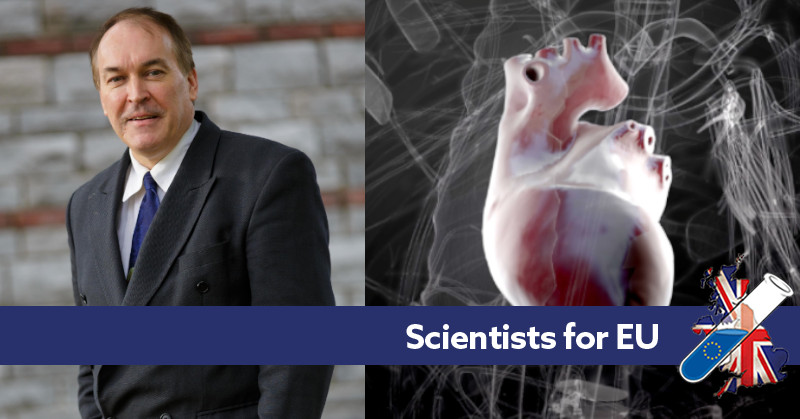 Otherwise in a no-deal Brexit scenario (where our government has cancelled EU funding agreed in the Withdrawal Agreement) we will simply hand over leadership of the project to our partners.

My field lies at the intersection of two critical areas, computation and biology. All three EU projects that I run are major multimillion Euro grants involving respectively nine, fifteen and fifteen partners and rely on the highest of High Performance Computing (HPC), where the UK has been a major player:


These grants form part of the EU “ecosystem” in leading edge computation and interrelate closely with numerous other research projects. Together the myriad efforts mount up, with our projects leading global activity in high-end computing, so the sum of this overall investment is greater than the parts.

Without continuing participation in this programme, the UK will turn its back on a proud history of leading the way in computation (not least thanks to Alan Turing) and will become an also-ran in this field of strategic importance. We can already see signs of decline with the recent failure of UK to sign up to EuroHPC and the ranking of the UK’s academic “flagship” computer, ARCHER, which has fallen to 131 on the Top 500 list of global supercomputing, albeit with a late replacement now approved for funding. We are slipping in high-performance computing – and killing the UK’s leadership of further projects in this critical domain would really hurt (further information on which can be found in this ScienceBusiness article).

This is no idle pride. The uses of high-performance computing in biological modelling, for example, are vast. From anatomy to drug chemistry, our own CompBioMed project aims to recreate individual humans in simulation to plan medical treatments and surgeries (see CompBioMed website for the full computer animation video explainer).

The most recent of my current projects is due to cost nearly €8m, starts in March 2019 and will run until 2023. We are due to lead it from the UK, but given the vagueness of the Government on critical issues I’m now wondering – will we be left out?

No-deal Brexit remains a likelihood, with even politicians freshly out of the Cabinet actively pushing for it. They speak of not paying any of the £39bn Withdrawal Bill that currently guarantees our full role in Horizon 2020 until the end of all projects in the programme. Where does that leave me and the many others in a similar position? Why are there no clear answers for such fundamental issues, when we are so close to exit?

Recently, the Government published technical notes explaining what would happen with Horizon 2020 in a no-deal Brexit scenario. They wrote:

The phrase “seeking to discuss” is hardly reassuring. In response to a letter I wrote to the Science Minister, Sam Gyimah, I received a clumsy rephrase of the technical notes:

“The Government is seeking discussion with the European Commission on the details of the UK’s ongoing participation on projects in a no-deal scenario. This would need to include projects where the UK participant is responsible for co-ordinating funding. Our intention would be to ensure that such projects can continue until their natural conclusion, delivering benefits both for the UK and the EU Member [sic] involves [sic].”

This is hardly reassuring. So much for good intentions, but what are the potential mechanics by which they ‘ensure’ this will happen? Is there any way to guarantee it? If not, what are the work-arounds that they, or I, or my partners, should take to minimize disruption? I lead these projects and have a responsibility to many labs and scientists who receive salary from this. I also would like people to understand that these are not abstract scientific research projects – they are projects of meaning to people in the UK and in Europe. At their heart, each is designed to deliver innovations and new technologies to improve people’s lives – in my case to improve our health and wellbeing as we age. I am worried about what will happen if the UK loses its leading position in initiative in innovation and enterprise. Will we miss out on improved healthcare?

As far as I can discern; in a no-deal scenario, we become a third country. That means the Commission will not pay for our role, but the UK Government has pledged to cover the costs of our UK labs. However, the UK Government has explicitly said that it will not cover the cost of our non-British partners. So will the Commission cover that? And will they pay through me as coordinator as before, or pay my partners through another single distribution route? Or demand a new coordinator be appointed? The Government is, presumably, ‘seeking to discuss’ this too.

Also, I am mindful of the fact that in a no-deal scenario, where the UK government has refused to pay all £39 billion of the ‘Divorce Bill’, there may well be legal disputes between the UK and EU over the settlement. Would the European Commission pay money into UK entity bank accounts under that circumstance, or would my projects become leverage? Would the UK government, flush with £39 billion of supposed savings in a no-deal Brexit be prepared to guarantee the whole cost of the project right now – my EU partners included – in order to save our work and project leadership from that scenario?

These are the questions that I need real answers to – and fast. It perturbs me that the Science Minister signs off with “I hope you find this information helpful” when merely regurgitating information that was unhelpful in the first place.

I’m demanding hard answers and I want them now. Is there a risk? Clearly there’s risk if the Government states that they need to speak to the Commission about it. When will they speak to them? If they don’t get an answer, what’s the fallback? Would a guarantee to pay the entirety of the project fix it? If so, I demand it. Otherwise, will I have to plan the handover of my project to another coordinator in Europe in order to myself preserve the uninterrupted work of my lab and my colleagues?? I will not have my partners’ labs and the livelihoods and salaries of everyone working on this held hostage by brinkmanship in a no-deal standoff.

I have a duty of care to the organisations and people who are committed to work on the projects I lead. I am obliged to behave responsibly and with integrity. I demand that the government behaves likewise. For the sake of the ability of the UK to play a leading role in the most advanced computational projects on the planet, the Government has to deliver more clarity and surety than regurgitating the loose threads of old technical notes. It would be most welcome if the Government would agree to take into consideration longer term benefits, such as the future health of the UK population, as part of their response.

Peter Coveney is Professor of Physical Chemistry and Honorary Professor of Computer Science at University College London (UCL). He is also Professor Adjust at Yale University.