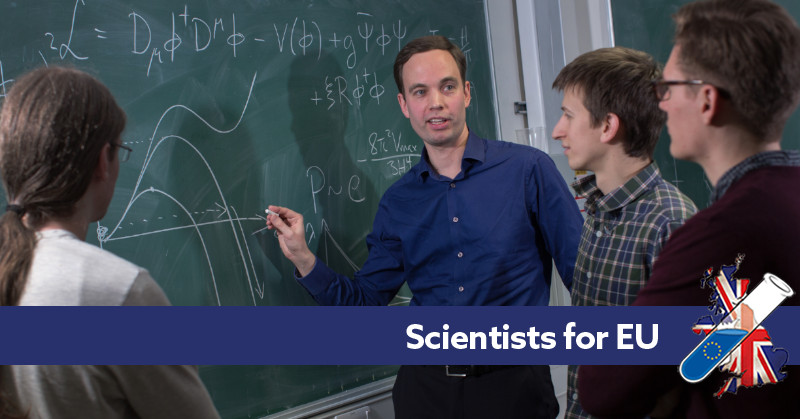 I used this fantastic right to free movement in 1998, to take up a postdoctoral position at the University of Sussex. Initially my intention was to stay for two years, but I have ended up staying in the UK ever since. One reason was that the UK is one of the leading countries in the world in my field of theoretical particle physics, and therefore one of the best places for me professionally. The other, just as important reason was that I felt welcome here and there were no hurdles for me, my wife and later also for my children to stay and live here. This, of course, was thanks to freedom of movement.

It is also clear that these two reasons are connected. A key factor behind the success of the UK in science, in spite of relatively low level of government funding, is that the UK science community is very international and has strong international connections. New ideas emerge when people from different countries come and work together, bringing new perspectives and new approaches, and the UK has built its success on being the place where this happens.

The UK’s proud history in theoretical particle physics illustrates this: Paul Dirac, who worked at the University of Cambridge and whose prediction of the positron in 1928 started the whole field, was a son of a Swiss immigrant. Abdus Salam, who worked at Imperial College London and was awarded the 1979 Nobel Prize for developing the theory of electroweak unification, the core of the Standard Model of particle physics, was from Pakistan. Many other pioneers of theoretical particle physics spent shorter periods of time working or studying in the UK.

Today, in Physics departments across the UK, 44% of academic staff and 61% of postdoctoral researchers are from abroad. EU freedom of movement means that the UK has access to a vast pool of talent and expertise, and because the UK is arguably the leading EU country in science and has the top universities, the UK is the place where this talent naturally concentrates. This, in turn, makes the UK more attractive also to non-European scientists. Now, because of Brexit, this is all under threat.

However, it is not only the loss of inward mobility that is threatening science. If freedom of movement ends, British people will also lose their right to live, work and study in Europe. In theoretical particle physics, approximately half of those PhD students who stay in research, currently go to work in another EU country as their first destination after their PhD. This is crucial for their development as independent researchers, as they gain experience, are exposed to new ideas, and build new collaborations and networks, which will form the basis of their future career.

The UK government wants to be able to choose “the brightest and the best” to come to the UK, but as anyone who has been involved in recruiting top scientists knows, the real challenge is to get the brightest and the best to choose you. They will have offers from other countries, too. If they are European, they have 30 countries where they are welcomed with no restrictions, visa fees or health surcharges, and if they are not European, the post-Brexit Britain will look much less attractive to them because the best Europeans are no longer here and because the UK will no longer have the same role in European projects.

In particular, studies show that personal and family reasons are the greatest barriers to researcher mobility. Moving abroad with a family is always complicated, but freedom of movement means that it involves minimal bureaucracy and does not require a costly visa. Partners and children can follow without restrictions, can work, and have full access to public services. Without freedom of movement, the financial cost can also become prohibitive. Postdoctoral salaries are generally low, often below the £30000 salary threshold for UK Tier 2 visas, so the £2600 average cost of visa and NHS fees together with not having access to the Child Benefit and the Child Tax Credit means that for many families, moving to the UK would simply not be a realistic option. Stopping freedom of movement would, in practice, make science the preserve of single men again.

Finally, it is important to remember that the 2016 referendum was not about freedom of movement. In a BBC/ComRes poll carried out just after the vote in July 2016, 66% of respondents felt that maintaining access to the Single Market is more important than restricting freedom of movement. It is also obviously incorrect to say that it has to end if the UK leaves the EU, because every country in Western Europe has freedom of movement, whether they are in the EU or not. Stopping it would make the British citizens the only Europeans without that precious right, disadvantage the next generation of British scientists who would not have the same opportunities as their peers on the continent, and cause serious damage to UK science.

Arttu Rajantie is Professor of Theoretical Physics at Imperial College London. His research area is theoretical particle physics and cosmology. He can be found on Twitter @ArttuRajantie